Green Parts International (GNPT - Pink Current) could literally crush the market!  This recycler brings $10M+ annually to the table and trades for under a penny!  Hmmmm...Yeah, we're in!!!

You, them, we, whoever wants to profit, searches long and hard for an opportunity like this and you just don't find these everyday.  A company with over $10,000,000 in revenues annually and in business for roughly 15 years...WoooHooo!  Today's the day, your the one and GNPT is the place.

Our position is decent, but not large and we will continue to add on  any weakness in the near future.  That said, we will (as soon as other positions free up) buy up every available share we can under .004! 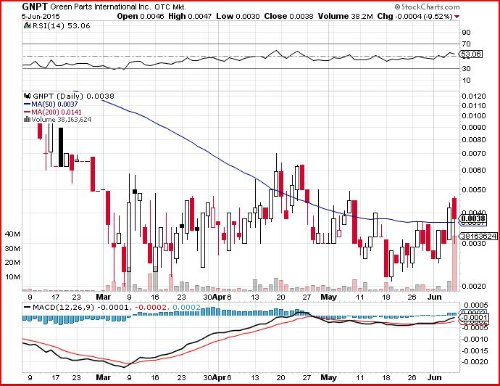 As you can see the chart shows a lot of recent action, some excellent intraday trading opportunities and what appears to be a nice sideways channel that it is trending in.

To say the least, a lot is in the works here.  Let's start off here with a 30 minute interview of the GNPT CEO...A lot is covered there and you can clearly here the confidence in the CEO's voice.

Most times when a CEO talks like that on the OTC its a bunch of lies and other nonsense spewing out of their mouths, but this guy has been there from the beginning and taken a start up company from ZERO revenues to 10-15 MILLION per year...

This is not your typical OTC CEO!

In the interview there are several key points covered that of are interest to us:

With how extremely undervalued Green Parts stock is, news about any one of these events above could trigger a mammoth explosion!  This is an exciting opportunity in our opinion and one with fairly limited downside in the short term.

With all the positives out of the way and too much CEO hype, let's talk about the pitfalls with GNPT's stock.  The reason for the collapse in share as of late is due to several factors, leading us to ask several questions...

This is a stock that is certainly in play and we expect to make a small fortune trading GNPT, but all the glitz and glamour on the surface may be hiding something dark and ugly just beneath the surface.  We are certainly going to put our hats in the ring, we already have, but we suggest playing this gem with a bit of caution...

We don't particularly care for the CEO and question his ability to run this company successfully...did he just stumble into an opportunity in the right industry, in the right place at the right time?  Or is he a legitimate businessman who can turn this thing around?

Quite frankly we don't care!  All we care about is the action this stock will generate in the days/weeks to come.  The Asher dilution "should" (we stress should) be done, or be about done, and no matter how legit the CEO is there is a great back story here and we feel this stock (minus heavy dilution) has a long way to run.

We see no reason why this stock does not find itself back in "at least" the .02 range, for a roughly 500%+ gain, and with some great press releases, maybe we are proven wrong about the CEO, it may soar much higher into the .07+ range...

Time will tell, but at this point, a mere .0038 for GNPT shares, we are buying all we can eat! 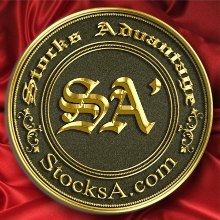